Much of George Orwell's inspiration for his classic novels, Nineteen Eighty-Four and Animal Farm, came from his experiences in the Spanish Civil War. 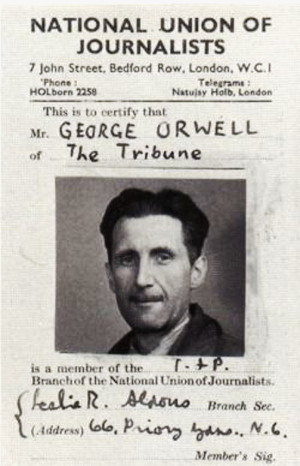 Like the Mac-Paps from Canada, Orwell went to Spain full of idealism, to support the duly-elected Republican government, which happened to be socialist, against a fascist-backed military coup led by Francisco Franco.

When he arrived in Barcelona in December 1936, Orwell was struck by the egalitarian mood. There were no class distinctions in dress or language. The socialist experiment seemed to be working and worth fighting for. He signed up with one of the militia groups, the Workers' Party of Marxist Unification, known as the POUM, and went to the Aragon front.

In the hills around Zaragosa, Orwell experienced the war first hand. The ill-trained troops had old rusty weapons; endured cold and a shortage of firewood and food; and they were locked in stagnant trench warfare that caused extreme boredom and discomfort including what he called “rats as big as cats.”

After 115 days of this, he was granted leave to return to Barcelona and meet his wife, Eileen. When he arrived there he noticed a distinct change in atmosphere. Servile language and differences in dress revealed that the old class distinctions were back. Not only that, political rivalries were splitting the anti-fascist, pro-government forces apart and fomenting violence between the factions. 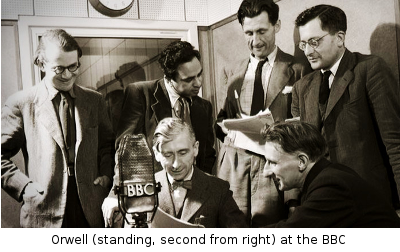 In hindsight, we now know that, while Nazi Germany was supporting Franco's side - which represented the interests of big business, the church and the landed aristocracy - Soviet Russia, which was under the grip of Stalin, was supporting the government side by providing weapons and military advice. The government had to appease the Stalinists as they had no other source of support. The French had a treaty with Russia and neither France nor England relished the idea of a successful communist government in their neighbourhood.

Within the Communist world, Stalin was battling competition for power from Trotsky and others and Spain became the place where those battles played out. Orwell witnessed it all. He saw brave men risking their lives at the front while newspapers were spreading lies and misinformation back in Barcelona and around the world painting them as traitors because they happened to be fighting within a group that was not one of the Stalinist brigades.

Orwell went back to the front, but was soon shot through the throat and was forced to return to Barcelona. By then his group, the POUM, had been declared treasonous and he was in danger of arrest. He and Eileen and some others managed to escape by train to Paris and eventually back to England.

In the end, Franco's military coup succeeded and he remained dictator of Spain until his death in 1975.

Orwell absorbed these experiences and they resulted in his famous books, Animal Farm and Nineteen Eighty-Four which warned of the dangers of totalitarianism and information control. While he had become disillusioned by Stalin's version of Communism, he never lost his belief in democratic socialism and the need to protect the rights of the working man against the insatiable demands of capitalism.

<< Prev: The Mac-Paps
Next: Canadian Wheat Board >>
Further Reference