This act established a provincial Department of Education and a non-denominational school system that all taxpayers would have to support. 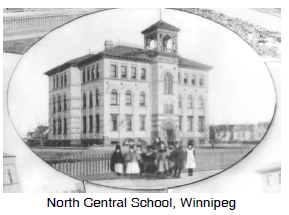 denominational: (referring to schools) having to do with some religious group or denomination.Denominational schools could still exist but they would receive no public funding and supporters would have to finance them in addition to paying public school taxes. This same round of legislation also took away official status for the French language, contrary to the terms of the Manitoba Act which had created the province in 1870.