When women in Manitoba won the right to vote in January 1916, they gained a huge victory for women's rights in Canada. 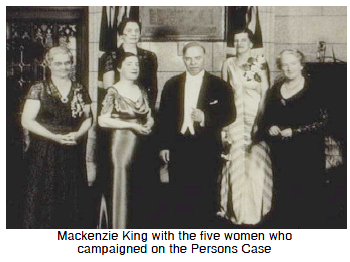 This franchise: the right to vote.franchise marked the beginning of a long slow road to equality.

During the 1920s, women became more involved in society than they had been before. Although they earned only half what men made, women participated in the work force and by 1929 made up 20 percent of its numbers. They generally worked as secretaries, sales clerks, factory workers, teachers or nurses.

Still, women had a long way to go in the political arena. 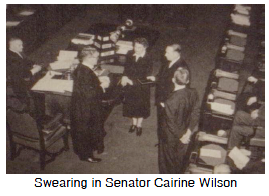 For one thing, women were not allowed to become senators in the federal government, even though the BNA Act said that "eligible persons" were allowed to be appointed to the Senate. Women, unfortunately, were not considered to be persons. To five women from Alberta, this seemed a ridiculous notion and they campaigned to have the law changed.

These women were politically active from the start. Louise McKinney and Henrietta Edwards had been suffragist: a person who favours giving suffrage (the right to vote) to more people, especially women.suffragists and had campaigned to win the vote for women. Nellie McClung and Irene Parlby were two of the first women to be elected to government after women got the vote - McClung to the Alberta Legislature: the branch of government responsible for making laws.legislature and Parlby to the federal cabinet.

Emily Murphy had the distinction of being the first female police magistrate: a judge in a lower court.magistrate in the entire British Empire.

Although it met with much opposition (even from the Supreme Court of Canada), the Persons Case made history when it was approved by the Judicial Committee of the Privy Council in England which said in its decision that "the exclusion of women from all public offices is a relic of days more barbaric than ours."