Louis-Joseph Papineau had been raised in a seigneuryseigneury: a seigneur's estate. in Lower Canada and was a well-to-do seigneur himself with large land holdings in the Ottawa Valley.

Yet his political education had acquainted him with the Republican ideas of President JacksonJacksonian democracy: the belief of U.S. president Andrew Jackson that government should be for the good of all the people, not just the privileged few. in the United States and he became a leader of a radical party, the Patriotes. He first joined the Assembly of Lower Canada in 1809 and became Speaker in 1815. In 1828, the assembly sent a petition to London asking for reforms which would reduce the power of the executive and the Chateau CliqueChateau Clique: the small, upper class, mostly English group that controlled the government of Lower Canada.. In 1834, the Patriotes drew up their demands as 92 Resolutions which included an elected second chamber, like the American Senate.

In November 1837 the Patriotes were exasperated enough to take up arms in a short-lived unsuccessful revolt. 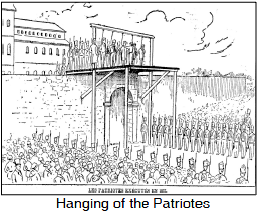 The British dealt severely with the French rebels and introduced a temporary dictatorship by the Governor and his Council which lasted for several months. Even today this chapter of history remains one of the remembered injustices fuelling Quebec separatism although other Quebec historians point out that Papineau and his fellow Patriote leaders were from a conservative professional elite who were more interested in advancing their group than bringing about democratic reforms for the good of the francophone majority.