The first European explorers to reach the Pacific coast of North America were probably the Spanish. They were mostly interested in South America, Mexico and southern California, but some of their explorers made it north to the waters around Vancouver Island. 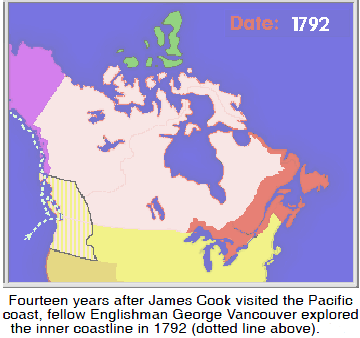 The Russians began to take an interest in the Pacific North West in the mid-1700s after Vitus Bering's last voyage. That expedition was shipwrecked on the way home and Bering died of scurvy, but the survivors returned to Russia with a cargo of 900 sea otter pelts which proved to be very popular with the Chinese upper classes. This prompted a maritime fur trade and Russian claims to Alaska. The Klondike gold miners heading to Skagway and Dawson City in the 1890s noticed the remnants of old Russian log churches in Alaska. When the Spanish heard of Russian activity up the coast from their colonies, they renewed their presence in the area, too.

Then, in 1778, the British navigator Captain James Cook arrived on the Pacific with two ships, Discovery and Resolution, and proclaimed Nootka Sound and the North Pacific Coast as British territory. For a few years the Spanish and British argued over the area, but the Spanish soon retreated to California and lands south. They left their mark, though, in many names like Galiano Island and the Strait of Juan de Fuca.

The British established a fur trade along the coast, but the North West Company wanted to find an overland route to link the Pacific forts with the inland fur trade. Alexander Mackenzie, Simon Fraser and David Thompson explored various rivers. Thompson's route down the Columbia proved to be the safest, but unfortunately, when he got to the mouth of the river, late in 1811, the site had already been claimed by American explorers, Lewis and Clark, and Fort Astoria was established.

This led to a period of disputed claims between the Hudson's Bay Company and the American Fur Company over the area known as the Oregon Territory. These arguments were settled in 1846 by the Oregon Boundary Treaty. 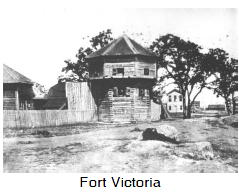 HBC governor, George Simpson, built Fort Langley on the Fraser River in 1827 to encourage British settlement in the face of rapid American expansion into the Oregon Territory. Getting to Fort Langley through the Fraser Canyon proved to be too dangerous for the fur traders, though, and a new site was sought for HBC headquarters. Simpson sent James Douglas to select the site and he chose the protected harbour and fertile plains of Victoria on Vancouver Island. Douglas was so involved in the early development of Canada's western-most province that he has been called "the father of British Columbia."

Under Douglas' supervision Fort Victoria was built in 1844, but even after the boundary treaty, the British feared American occupation of their lands and moved to secure their position. Vancouver Island was proclaimed a crown colony in 1849 and the Hudson's Bay Company was given a monopoly over trade in the area on the condition that it actively encourage settlement and establish a colony within five years or lose the royal charter and the monopoly.

James Douglas became governor of the new colony, after the first governor, Richard Blanshard, left in exasperation, admitting that Douglas and the Hudson's Bay Company had the real power and authority in the colony. Under Douglas, other industries were developed on the island - lumbering and coal - and fine town houses began to line the streets of Victoria in place of the rough fur trading cabins. 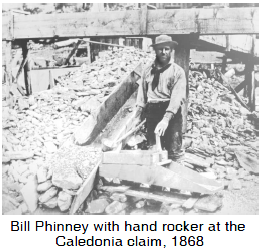 In the 1850s a small economic boom affected Victoria as it became a supplier of wood and provisions for the California gold rush. Coal mining around Nanaimo, up island from Victoria, also flourished.

The Fraser River Gold Rush of 1858 changed the nature of the colony. The massive influx of American miners arriving by ship from the American coast created another, bigger windfall for Victoria. Farmers prospered and a successful merchant class grew up to meet the demands of miners stopping in Victoria to stock up on provisions. The Hudson's Bay Company lost its monopoly over the economy of the region, first in practice, then by official decree from Great Britain.

With large numbers of Americans flooding into the Fraser gold fields, Britain feared American annexation and proclaimed a second crown colony on the mainland in 1858. This was to curtail American designs on the region and to allow the enforcement of law and order among the gold miners. The colony's first judge was Matthew Baillie Begbie who was known for his swift, but fair justice. 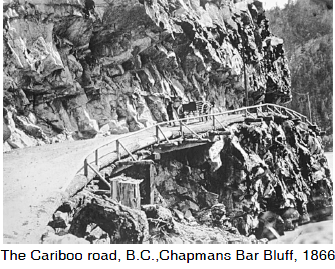 The American miners appreciated the use of law rather than "miners' justice" or violence to settle disputes, but they resented the fact that Begbie insisted on fair application of the law to Indigenous, Chinese and other non-white groups as well. He even helped set up special all-Indigenous courts to judge cases involving only First Nations people.

More gold was discovered in 1860 in isolated deposits up the Fraser Canyon. To supply these mining communities, Douglas ordered a road to be built and the 650-kilometre long Cariboo Wagon Road was finished in 1866, the same year that the two western colonies - Vancouver Island and the mainland - united to form the single colony of British Columbia. While Douglas' road building projects benefited development in the colonies, they were expensive endeavours and by the time the two colonies united, they had a combined debt of $1.3 million.