Close neighbours of the Mi'kmaq were the Malecite (also spelled Maliseet). They lived mostly in the western part of what is now New Brunswick. While the Mi'kmaq were coastal people, the Malecite depended more on inland resources and even cultivated corn. We know less about the Malecite because the early European settlers and explorers had little contact with them.

Hunting and fishing were the main activities of the Mi'kmaq. In winter they would camp in smaller family groups and hunt for deer, elk, seal, beaver, otter, moose, bear and caribou. In the spring and summer they joined with other families to form larger camps. They gathered and boiled maple tree sap in the spring and did a little farming in the summer, but their main food source at this time of year was fish - smelts, herring, sturgeon, salmon, cod and eels.

The Mi'kmaq built birchbark-covered wigwams which were light and easy to roll up and carry to a new location. Sometimes wigwams were round with a single fire in the middle. These accommodated 10 to 12 people. Larger wigwams were long with a fire at each end and room for 20 to 24 people.

The Mi'kmaq had birchbark canoes that could hold five or six people. In the 17th century they added sails to these canoes. In winter they travelled through the snow with the aid of snowshoes, sleds and toboggans. In fact, our word "toboggan" comes from the Mi'kmaq "taba'gan."

The Mi'kmaq had no central governing authority like the Haudenosaunee. There were seven traditional political districts, each headed by its own chief or sagamore. A Grand Chief located in the head district of Cape Breton Island hosted periodic council meetings attended by the band chiefs. The Mi'kmaq were also part of the Wabenaki Confederacy, a loose alliance of several indigenous groups from the northeastern region who met once every few years, sometimes as far away as present-day Boston. 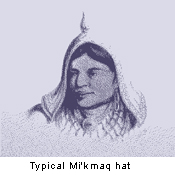 Men wore loincloths in the summer and fur robes with leggings and moccasins in winter. Women wore similar robes or long tunics made from skins which were decorated with paint and porcupine quills. In the 18th century they began to wear pointed hats. Most of their domestic tools were made from lightweight birchbark, often elaborately decorated with porcupine quills. These quilled boxes and baskets are quite distinctive to the Mi'kmaq and Malecite.

The Mi'kmaq shared with other Algonquian nations a belief in a supreme being. There were also a number of lesser gods, some in human form. One of the best
known is Glooscap who was more of a cultural hero than a god, a human-like being with superhuman abilities. Shamans shaman: a medicine man in North American indigenous culture. Someone with special spiritual gifts and the ability to heal. could intercede between gods and humans to cure the sick, predict the future, or help in warfare or the hunt. The Mi'kmaq held big feasts to celebrate marriages, funerals, and the beginning of the hunting season. Elders would give speeches that told family stories and kept their history alive. The Mi'kmaq chief, Membertou, converted to Catholicism in 1610 and the Mi'kmaq remained among the most firmly converted of the indigenous peoples.

European contact changed the economy of the Mi'kmaq, bringing them European goods like knives and different foods, most of which were not as healthy for them as their traditional diet. A lot of native people were killed off by European diseases like smallpox. The Mi'kmaq helped the Acadians settle in to their new life. They shared their hunting and fishing techniques with them, told them where to find local resources, showed them how to make clothes and canoes and how to insulate their houses against the winter. The Acadians had fairly good relations with the Mi'kmaq, but they participated, along with the English, when Governor Cornwallis offered a bounty for the dead body of any Mi'kmaq man, woman or child.