The coalition government of Baldwin and LaFontaine introduced the Rebellion Losses Bill in 1849. This was a very controversial piece of legislation which proposed to compensate those who lost property during the 1837 rebellions. Many of those who would receive payment had been on the rebel side. Conservatives were enraged that treason: betraying one's country or ruler.treason was being rewarded. 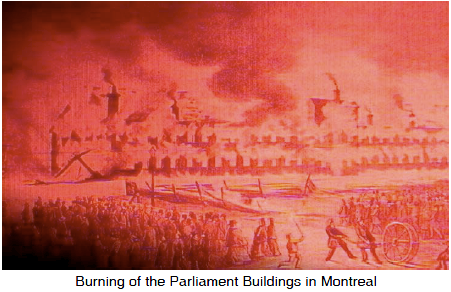 Although the governor: an appointed representative of the Crown sent to govern a colony.Governor of Canada, Lord Elgin, personally agreed with the Conservatives he had to sign the bill giving it Royal Assent because it had been presented by leaders who had the support of the majority in the Assembly. The Conservatives reacted by burning the Parliament Buildings in Montreal, throwing stones at Elgin's carriage, attacking LaFontaine's house and burning Mackenzie and Baldwin in effigy: to "burn in effigy" is to burn or hang publicly a crude representation of someone (like a straw figure) to express hatred.effigy. Despite these protests, Great Britain upheld Elgin's decision. This was the first big test of responsible government: a system of government in which the executive (law makers) must have the confidence (support) of a majority in the elected legislative assembly.responsible government.