The treaty that gave Acadia to Great Britain in 1713 also gave Newfoundland to the British leaving the French with no base to serve its North Atlantic fishing industry.

Their solution was to build a community on Ile Royale (today's Cape Breton Island) and so Louisbourg was founded. Astonished at the great expense of the project, Louis XIV remarked that he expected to see its ramparts rising across the ocean. The fortress served many purposes. It was a port for trade with France and the West Indies; it was a centre for launching fishing fleets; and it was a strategic military location with a state-of-the-art fortress.

When war broke out between France and Great Britain in 1744, Louisbourg was one of the targets of the New Englanders. After a long siege, the fort was taken. This was such a loss to the French that they bargained it back in 1748 by giving up territories elsewhere. 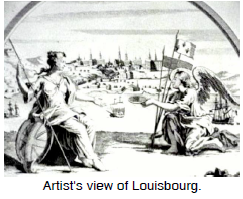 This upset the British in Nova Scotia who responded by founding their own fortified town at Halifax in 1749 and moving the centre of government there from Annapolis Royal. In order to build Halifax the British cleared forests that had been Mi'kmaq hunting lands and put in transportation routes which increased hostility between the Indigenous people and the British. Since the Acadians still enjoyed good relations with the Mi'kmaq, the British saw this as another reason to distrust Acadian neutrality. 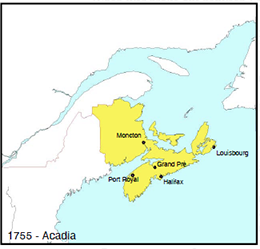 In 1758, during the Seven Years' War, the British again took Louisbourg. They went on to capture Quebec City in 1759 and Montreal the following year, claiming all French North American territory as their own. Today the fortress of Louisbourg is a restored historical site.