The nations that make up the Haudenosaunee Confederacy are Mohawk, Seneca, Oneida, Onondaga, Cayuga and Tuscarora. The speak variations of the Iroquoian language and historically inhabited Eastern woodland areas of northern New York State and southern Quebec and Ontario. Iroquoian was one of the two big language groups in the East (along with the Algonquian language). The Haudenosaunee (called Iroquois by the French and Six Nations by the English) first came into contact with Europeans when Jacques Cartier sailed down the St. Lawrence to the villages of Stadacona (present-day Quebec City) and Hochelaga (present-day Montreal) in the 1500s.

These St. Lawrence Haudenosaunee had disappeared by the time French exploration resumed again in the 17th century with Champlain. The Huron-Wendat and Petun of southern Ontario were also related groups (described in another section). The original five nations - Seneca, Cayuga, Onondaga, Oneida and Mohawk - were joined in the 18th century by the Tuscarora to form the Six Nations.

The Haudenosaunee were more agricultural and therefore less nomadic: people who move from place to place in search of food or fresh grazing lands.nomadic than the Anishinaabe. They grew corn, beans, squash and pumpkins. They also hunted, fished and gathered wild berries.

The Haudenosaunee lived in villages of longhouses (their name means "people of the long house"). Each longhouse contained several families related to each other through the female line. The villages were protected by defendable barricades and surrounded by their cultivated fields. 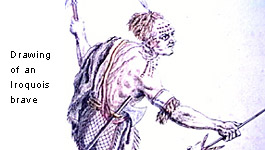 The Haudenosaunee Confederacy had a council of 50 chiefs, or sachems, headed by a chief of the Onondaga, since the Onondaga were located geographically in the middle of the six nations. At the death of a chief, the highest woman in his clan would choose the next chief. Decisions had to be by consensus, or total agreement. If the chiefs could not come to a unanimous agreement about something, then each chief was free to make his own decision and was not bound by the decisions of the others. The Haudenosaunee Confederacy has been described as the oldest participatory democracy.

Family structure followed a clan system, each member of the clan linked by a common female ancestor. The women organized the home life, property, crops and child-rearing while the men travelled to hunt and fish.

The Haudenosaunee Confederacy held a Feast of the Dead to send their relatives to the other world, but they did not share the Huron-Wendat practice of burying all the bones in a central grave mound. The preparation and ceremony that went into these feasts served to bond the smaller clans and families together.

The Europeans brought the idea of a money exchange which the Haudenosaunee adapted as wampum. Wampum was made from shells woven into a belt that would be given as a gift at important events. The Haudenosaunee allied themselves with the British against the French and against the American War of Independence. After American independence, a number of Haudenosaunee were among the Loyalists who came to Canada. Perhaps the most famous was the Mohawk chief, Joseph Brant. The city of Brantford in southern Ontario is named after him. Another Mohawk Loyalist was Smoke Johnson, grandfather of the famous poet/entertainer E. Pauline Johnson/Tekahionwake (1861-1913). Smoke Johnson reportedly killed seven Virginians during the Battle of Queenston Heights in the War of 1812.