By 1791 the population of the colony known as Quebec had changed considerably. A lot more English speaking people had added their numbers to the original United Empire Loyalists who fled the American Revolution. 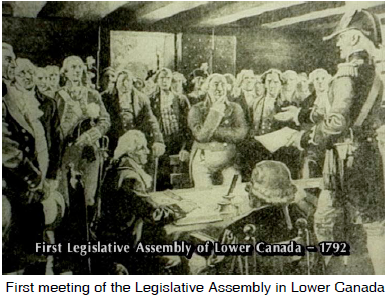 These new settlers weren't happy living under French law and the Roman Catholic church. They wanted to hold their lands outright, not as part of the
seigneurial system: a feudal system of land ownership whereby huge grants put land ownership in the hands of seigneurs who rented sections to farmers.seigneurial system and they wanted privileges for their Protestant churches similar to those granted to Roman Catholics. Also they were used to having democratic democracy: a system of government that is run by the people who live under it, either through direct vote or by electing representatives. institutions like an elected Assembly to give them a say in how they were governed. 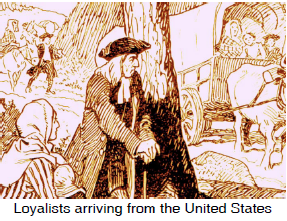 The British were faced with a dilemma. A single Assembly for the whole colony wouldn't work for the English settlers because the French had the majority. And, while the British had to create the appearance of an Assembly, they didn't really want to give it much power because they knew from the American Revolution what that would lead to.

So the British answer was to divide the colony into two parts - Upper Canada for the English and Lower Canada for the French and give each its own Assembly, but in such a way that the British Governor and his appointed Council still made the final decisions about most things. This was a compromise full of problems.

The Council and the Assembly were often at loggerheads and since the Assembly did have power in the vital area of taxation, both groups were in a position to block the aims of the other resulting in a stalemate. This period also marked the beginning of a gradual, but profound transition from a commercial commercial economy: involving the exchanging or buying and selling of goods or services; trade. This was the type of economy that dominated the 18th century (see mercantilism). to an industrial industrial economy: involving business and manufacturing, where goods are produced with labour and machinery, usually on a large scale, like in a factory. economy that led to a change in the power structure of the country.