Imperial Conferences were meetings which brought together Britain and its Dominions. 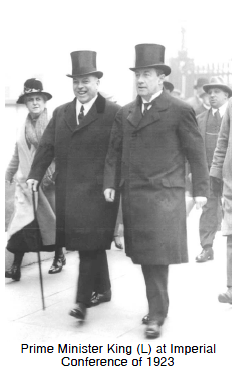 In the twenties these conferences were increasingly forums in which the Dominions, and especially Canada, insisted on greater independence from the mother country, England. The Imperial Conference of 1923 endorsed Prime Minister Mackenzie King's independent action of signing the Halibut Treaty without Britain. This treaty was a fishing agreement between the United States and Canada. For the first time Canada had negotiated and signed its own treaty without involvement from England.

The Imperial Conference of 1926 passed the Balfour Report which recognized all the Dominions of Britain's former empire as self-governing equal members of a new association called the British Commonwealth of Nations.