George Brown was born in Scotland in 1818 and emigrated to Canada when he was twenty. He founded a newspaper in Toronto called the Globe, which later joined with the Mail & Empire to become today's Globe & Mail. 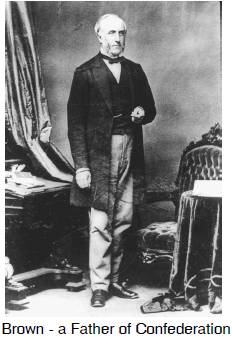 The newspaper was very useful for promoting Brown's political ideas and publishing information about the Northwest which he wanted Canada West to take over and develop. Brown was elected to the Assembly in 1851 and was a strong advocate of representation by population or rep by pop, rather than equal representation for Canada East and West. By 1851 English-speaking Canada West had the larger population and would have the majority in any combined Assembly. As well, Brown was known for his anti-French views and favoured an English majority government. Brown broke the parliamentary deadlock in 1864 by crossing the floor and joining his long-time political opponent John A. Macdonald and the Liberal-Conservative coalition of Macdonald and Étienne Taché. He was a strong supporter of Confederation and spoke on constitutional issues at the Charlottetown Conference. Brown was shot in the leg by an ex-employee in March 1880 and died two months later from infection in the wound.