The Indigenous people of the arctic have to survive in the harshest environment. The winters are long and dark. Rivers and lakes are frozen nine months of the year. And the land yields none of the resources, like roots, berries and tree bark, that southern peoples relied on for food and building materials.

The Inuit also have different, more Asian physical features. The Inuit (singular - Inuk; language - Inuktitut) were the last to be affected by European influence, being largely untouched by it well into the 19th century.

Most Inuit food came from the ocean. Seals provided food for both people and dogs as well as oil for heating and cooking and hides for clothing and tents. Walrus and whales were also hunted. The blubber blubber: the fat of whales. of sea mammals was one of the most important resources for the Inuit. Caribou caribou: any of several kind of North American reindeer. and fish added to the diet. There was little food that could be gathered except for birds' eggs. Food was often eaten raw because cooking fuel was precious.

In winter, houses were made out of blocks of snow, cut and constructed into a dome shape. When the structure was finished, it was tightly sealed and a seal oil lamp was lit to heat the air. This would melt the inside snow which would quickly freeze up again creating a bond of ice over the whole inside surface. The snow huts, or igloos, had snow-block passageways at the entrance to provide cold-storage and to protect the interior from the elements. In summer, the Inuit made log huts if they could find enough driftwood, or they built skin-covered tents.

The Inuit were the only people in Canada to use oars which gave them greater power to propel the large open travelling vessels they called umiaks. They often hunted in one-person kayaks with double-bladed paddles. These were covered in seal skins. Dog sleds and toboggans were used in winter. 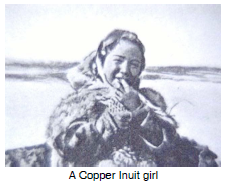 In winter, families grouped together in bands because they needed a group effort to extract food from the sea at this time of year. In summer they broke up into family units again to hunt caribou and fish. Women had a great deal of status in the society because they made the clothing that was so important in this climate. Two layers of clothing were stitched from caribou hides - the fur turned inside on the inner layer and outside on the outer layer. There was a great deal of equality among people and chiefs were chosen only for temporary purposes and had no great authority.

The Inuit world was full of spirits, most of them potentially harmful. The sea goddess was particularly important, controlling both weather and seals. There was no seclusion of adolescents as in many other native groups. There were seldom large festive gatherings, either. There was more social interaction in winter when families grouped together and the weather prevented much outdoor activity. People would gather to sing songs, tell stories and play string games like cat's cradle.

<< Prev: Dene
Next: Effects of the Fur Trade >>
Further Reference