In the 1840s Great Britain was moving away from the mercantilism: an economic system in which a nation depends on its colonies to provide cheap raw materials and a market for its manufactured goods. This creates an economy that has more exports than imports. Mercantilism replaced feudalism.mercantilist economy which tied colonies to the mother country. British factory owners wanted access to cheaper raw materials and objected to protective tariffs: duties paid on goods being imported into or exported from a country.tariffs which gave colonial imports an advantage over imports from other countries. 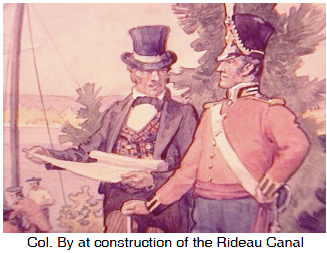 They wanted
free trade: trade across borders without tariffs or restrictions.free trade which would allow them to buy raw materials from the cheapest supplier and sell their manufactured goods wherever they could get the best price. In 1846 the British Parliament repealed the Corn Laws and introduced other free trade measures.

Canada, which had been operating under the protective colonial system, felt abandoned by Britain and the political effect was to increase support for responsible government: a system of government in which the executive (law makers) must have the confidence (support) of a majority in the elected legislative assembly.responsible government, since there seemed little reason to remain subservient to Great Britain. Likewise, in Westminster, the mood was more responsive to responsible government since the colonies no longer served the same economic purpose they had before.