1713: Peter the Great of Russia conquered Swedish territory on the Baltic Sea and began to build his "window on the west," St. Petersburg. This was Russia's first seaport and was built on drained marshland. During the Communist era it was known as Leningrad.

1720: The South Sea Bubble burst. The South Sea Company had been formed in England in 1710 to trade in South America and the Pacific. Great profits were promised and thousands invested their money. When the reality turned out to be much less than the promise, stock prices tumbled and investors lost everything. The directors of the company and the government were suspected of corruption. 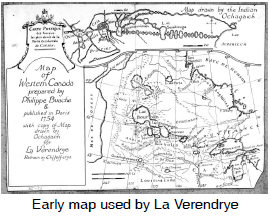 1731-32: French Canadian explorer Pierre Gaultier de la Verendrye travelled as far as Lake of the Woods where he established Fort Charles. Two years later another post was established on the Red River. In this way the French began to link their fur trading headquarters in Montreal with the Indigenous traders of the far west.

1778: Captain James Cook was killed after returning to the Sandwich Islands. Cook was sent by the British to explore the northwest coast of North America. His ships were called "Resolution" and "Discovery." When his journals were published in 1784, their glowing reports of sea otters around Vancouver Island spurred on the fur trade in the west coast. Spanish and Russian navigators had explored the Pacific coast before Cook and the British arrived.