Canada "from sea to sea" became a reality in 1949 when Newfoundland joined Confederation. Although it was our newest province, its capital, St. John's, is the oldest city in Canada. 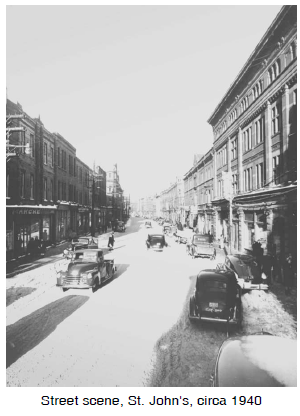 European fishermen have been coming to the shores of the Grand Banks for hundreds of years. Our tenth province had held out a long time. It declined Confederation in the 1860s, feeling, quite logically, that its outlook was to the Atlantic and to England. It had very little to do with the other North American colonies. The issue came up again in the 1890s when poor cod prices put the island into bad financial straits. The idea of joining the rich provinces of Canada had some appeal, but not enough to convince Newfoundlanders to give up their independence.

Economic problems have been a constant plague on Newfoundland and in the depths of the depression, it was forced to give up its Dominion status and go back to being a colony of Great Britain so that England would cover its debts.

After the Second World War the debate began again. Most people wanted to change their current colonial status which included government by appointed officials from England. 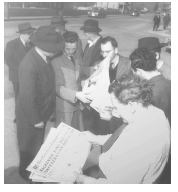 But some wanted responsible government with economic links to the United States. Others wanted to join Canada. The leading Confederationist was a feisty broadcaster and labour leader, Joey Smallwood. After two
plebiscite: a direct vote by the qualified voters of a country, province, etc. on some question.plebiscites, Confederation won by a narrow margin.

At the time Newfoundland joined with Canada, the average income there was one-third of the Canadian average and the death rate associated with diseases of poverty was two to three times higher. 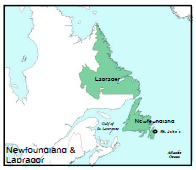 Smallwood promised reforms and the new province enjoyed the economic benefits of hydro-electric projects, foreign investment, injections of federal money and improvements in the educational system. Some of the promised gains were never delivered, though, and not all the changes were welcomed. Modernization took its toll on the unique culture of the outport: a small community on the coast of Newfoundland usually accessible only by boat.outport communities as Gordon Pinsent portrayed in his film, John and the Missus, and economic difficulties continued to beset Canada's tenth province.

Next: A Brief History of Newfoundland >>
Further Reference