Louis Hippolyte LaFontaine was born in Boucherville, Quebec in 1807. As a young man he was elected to the Legislative Assembly of Lower Canada where he supported Louis-Joseph Papineau until Papineau fled to the United States after leading the Rebellion of 1837. 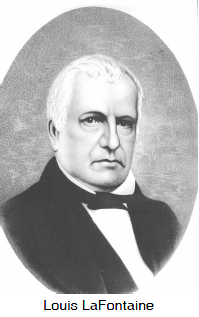 LaFontaine joined with Robert Baldwin from Upper Canada to form a reform ministry in 1842 and 1843. They both resigned after disagreements with the British governor: an appointed representative of the Crown sent to govern a colony.Governor, but came together again under Lord Elgin to lead the first truly responsible government: a system of government in which the executive (law makers) must have the confidence (support) of a majority in the elected legislative assembly.responsible government in Canada in 1848. LaFontaine was chief justice of Canada East (formerly Lower Canada, now Quebec) from 1853 until his death in 1864.

<< Prev: Robert Baldwin
Next: Co-operation of French & English in the 1840s >>
Further Reference