Between 1871 and 1877 seven treaties were signed between the Canadian government and various First Nations groups of the northwest ceding most of the western plains to the Canadian government (the Royal Proclamation of 1763 had stated that settlers could not occupy land that had not been surrendered to the Crown by the Indians). 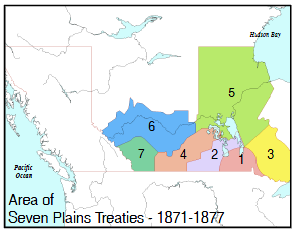 The treaties were signed as follows:

Treaty No. 4 - signed on September 15, 1874 with the Cree, Ojibwa (Saulteaux), and others. (Chief Piapot argued that the written text did not contain the substance of verbal promises made during negotiations.)

Treaty No. 6 - signed (in stages) between 1876 and 1899 with the Plains and Wood Cree. (See Poundmaker and Big Bear to learn about opposition to this treaty.)

In the first treaties, the Indigenous people gave up their land in return for reserves that allowed 65 hectares of land for each family of five, a small annual payment of money and some food rations: a fixed allowance of food.rations. In later treaties Indigenous people insisted on receiving farm animals and machinery so they could support themselves with agriculture after they had given up their nomadic: people who move from place to place in search of food or fresh grazing lands.nomadic way of life. The government officially supported this idea of turning the First Nations into farmers and they sent out government agents to assist them, but in practice, government policy had the effect of making profitable farming impossible for the Indigenous peoples.

The Indian Act of 1876 governed the administration of treaties and all matters to do with the Indigenous peoples in Canada. A separate Department of Indian Affairs was also established. The first Commissioner of Indian Affairs was Edgar Dewdney. He was followed by Hayter Reed who implemented the peasant farming policy of the 1880s.

Indigenous people on reserves were not considered full citizens and did not have the right to vote. The government hoped that eventually they would leave the reserve and become "Canadianized." Indigenous children were taken from their parents and sent to boarding schools to learn English or French and the Bible. This was the beginning of the shameful residential school system.

An amendment to the Indian Act in 1884 made schooling compulsory. Since most First Nations communities were far from the schools, this had the effect of forcing all Indigenous children into the residential school system where they were not only disconnected from their families and culture, but also subject to sexual and physical abuse.

<< Prev: The Importance of the Buffalo
Next: Poundmaker >>
Further Reference