Before the Canadian government could go ahead with plans to build railways and settle the west it had to deal somehow with the people who already lived there. Several different First Nations groups hunted buffalo throughout the northwest. There were Cree, Ojibwa, Assiniboine, Chippewa and Blackfoot. By 1870 their way of life was already threatened by white encroachment and the introduction of the rifle which was rapidly wiping out the buffalo herds. 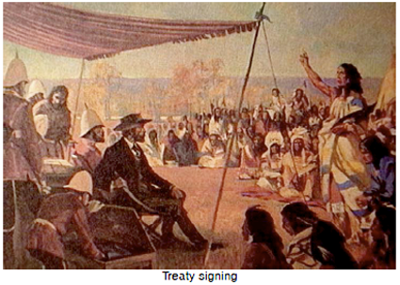 Leaders like Poundmaker and Big Bear realized they were losing their main source of food and they were willing to negotiate with the Canadian government. But they knew they needed more than a reserve and a small cash allowance to carve out a new way of life. To establish an agricultural society they needed farm animals, wagons, horses, tools and equipment. The Treaty Commissioner promised these things, but never delivered. Time and again Indigenous leaders tried to make the government live up to its treaties.

By 1879 the buffalo had disappeared from Canada. First Nations people were close to starvation. The government promised rations: a fixed allowance of foodrations only to those who were under treaty and there was no more room to bargain. The Indigenous peoples had been trying to establish reserves next to each other to create an "Indian Territory", but the Canadian government forced them to break up into small bands and pushed them north, away from the best farm lands and the railway. After the Northwest Rebellion of 1885, the government, on flimsy evidence, jailed Indigenous leaders for supporting Louis Riel. In fact, the old leaders had been cautioning their people against violence because they feared a war which they would lose. 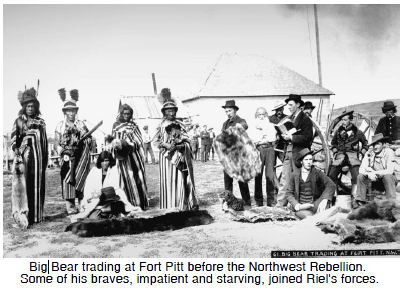 Throughout the 1880s, with their leaders gone, their food source gone, their guns and horses confiscated, the Indigenous peoples tried to become farmers. This was supposedly the government's policy, but this policy had a peculiar twist. It claimed that in order to "evolve" from a so-called savage to a civilized existence, Indigenous people had to go through a period of primitive peasant agriculture. This meant subsistence: a means of keeping alive; just enough to keep alive with nothing leftover or surplussubsistence farming on a minimum amount of land using only the most elementary handmade tools. Labour saving machines like seeders and binders were not allowed on the reserves.

Underlying this "peasant farming policy" was the fact that the new white settlers in the west - who happened to have economic and voting power - didn't want competition, especially during the 1880s which were lean times for everyone. And by forcing Indigenous people onto small individual pieces of land, the tribal system would be broken and surplus land not required for subsistence would be available for European development.

Having to do everything by hand and without communal help in the short growing season of the Northwest, meant that Indigenous farmers often lost half their crops. If they did end up with a small surplus: extra quantities leftover after basic needs are metsurplus to sell, their markets were restricted. It's not surprising that eventually they gave up. Then the government could shake its head and say that obviously Indigenous people could just not adapt to an agricultural life.

Next: The Importance of
the Buffalo >>
Further Reference