Halifax was founded by Great Britain in 1749 under governor Edward Cornwallis. The British wanted to encourage settlement there to counteract the French military presence at Louisbourg. To build Halifax the British cut down forests and infringed on Mi'kmaq lands. This brought them into greater conflict with the Indigenous people who were friends and allies of the Acadians. Mi'kmaq raids that resulted from the founding of Halifax became another factor in British distrust of the Acadians which culminated with their expulsion. 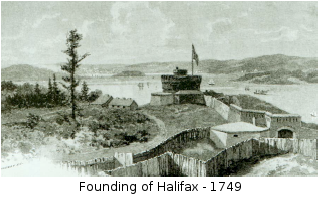 As well as establishing a military fort there, the British encouraged more Protestant immigrants to come to add weight against the larger numbers of Catholic Acadians and their converted Mi'kmaq allies. (Chief Membertou of the Mi'kmaq nation was one of the first chiefs to be converted to Catholicism back in 1610.)

As part of this Protestant immigration a number of German Protestants arrived later in the 1700s and established a settlement around Lunenburg, just down the coast from Halifax.

<< Prev: Louisbourg
Next: The Expulsion of the
Acadians >>
Further Reference