Great Britain practised adversarial adversarial: from "adversary" - a person opposing or resisting another person. law. Two lawyers argued each side of the case before a judge and jury. The accused was considered innocent until proven guilty. In New France the French inquisitional inquisitional: from "inquisition" - a thorough investigation or searching inquiry. approach was used. 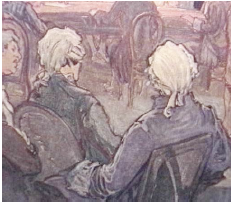 There was just you and the judge who was sometimes the local seigneur seigneur: a landowner in New France whose estates were originally granted by the King of France. He also administered justice within his seigneury.. You pleaded your case and various witnesses were heard, though each was questioned privately by the judge so no one knew the other's testimony. The accused was considered guilty until proven innocent and it was up to the accused person to make their own case and convince the judge of their innocence.

When the judge had heard enough to make a decision, the verdict was given and a sentence passed on the spot. Although this could have been more arbitrary arbitrary: based on one's own wishes, not based on rule or law. than the jury system, most judges tried to be fair. It was certainly a lot cheaper, since you didn't have to hire an expensive lawyer and decisions were reached much more quickly.