1850: French chemist Louis Pasteur began researching fermentation and putrefaction. His findings about bacteria led to the development of the process of pasteurization to destroy harmful bacteria in milk.

1857: Queen Victoria selected Ottawa as the new capital of Canada. 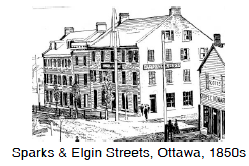 After 1849, when the parliament buildings in Montreal were burned in reaction to the Rebellion Losses Bill, the capital of the united Canadas had alternated between Toronto and Quebec City. Ottawa was chosen to be the new permanent capital because of its location on the Ottawa River, the dividing boundary between Canada West and Canada East. It was also far enough away from the American border to be difficult to reach in the event of an invasion. Until 1855, Ottawa was called Bytown and its main industry was lumbering.

1858: Gold was discovered along the Fraser River. 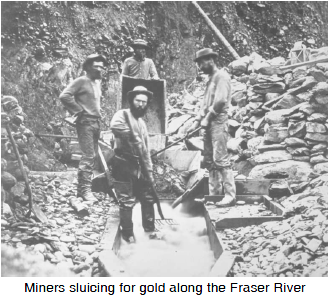 This started a gold rush that brought many American prospectors north and led Britain to create the colony of British Columbia to establish sovereignty over the area.

1859: Charles Darwin published the book The Origin of Species. Its theories of evolution contradicted the traditional Biblical story of creation which upset fundamentalist religious thinkers. Darwin's theories were used to promote a new way of looking at the progress of life - "the survival of the fittest."