Another factor which spurred on the idea of Confederation was a series of attacks on the Canadian border from the Fenians in the summer of 1866. Fenians were a secret society of Irish Catholics who had emigrated to the United States, but were still committed to Irish independence from Great Britain. 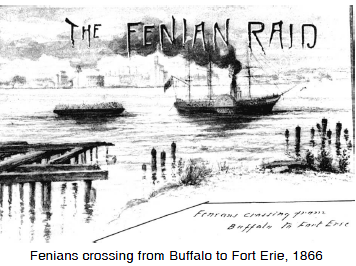 Since the North American colonies were the closest place they could attack Britain, they launched raids at several points along the Canadian border. They expected the colonists to give in willingly, especially the Irish immigrants and the French Catholics. They were mistaken. Neither the Americans nor the Canadians supported them. But their attacks made Canadians realize how vulnerable they were and strengthened support for Confederation.