An idea has to go through several stages before it becomes a new law. You could call it a seven-step process. 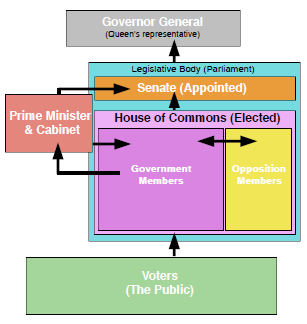 1) An idea is discussed and approved by cabinet: a group of advisors chosen by the Prime Minister from the majority party in the House of Commons.Cabinet which then writes it up as a bill. A bill is a proposed law.

2) The Cabinet introduces the bill to the House of Commons: the body of elected representatives who meet in Ottawa to make laws and debate questions of government.House of Commons and the members of the House read it. This is called the first reading.

3) The bill is discussed and voted on in the House of Commons. This is called the second reading and is the most important stage.

4) The House of Commons sends the bill to committee where a smaller group of its members examines the bill in detail and makes changes.

5) Then the revised bill is voted on by the House of Commons which either accepts or rejects the whole bill. This is third reading.

6) If the House passes the bill it is sent on to the senate: the upper and smaller branch of parliament (the legislature); its members are appointed.Senate which discusses it and generally approves it.

7) The final step is Royal Assent. The Governor General: the representative of the monarch (crown), appointed on the advice of the Prime Minister for a term of five years.Governor General, on behalf of the Crown, signs the bill to make it officially law.

<< Prev: Political Parties
Next: Other Countries with a Federal System >>
Further Reference