Jean-Baptiste Colbert was born in 1619 and died in 1683. He was one of Louis XIV's most clever ministers and actively promoted the development of France's colonies which had been almost ignored in the past. 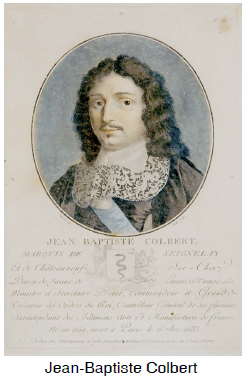 Colbert saw the potential of using the colonies to create an economically self-sufficient unit with France. Such policies are known as mercantilismmercantilism: an economic system in which a nation depends on its colonies to provide cheap raw materials and a market for its manufactured goods. This creates an economy that has more exports than imports. Mercantilism replaced feudalism., a system of trade where the colonies provide raw materials and a market for finished goods from the manufacturers of the mother country.

In New France, Colbert encouraged settlement by sending young girls (les filles du roi) to be brides for the fur traders. He also sent over livestock to assist pioneer life and the first horses arrived in the colony in 1665.

At home in France, Colbert used tariffs, subsidies and other government regulations to promote industry. He also built a good system of roads, canals and harbours to transport goods within France. A strong navy and merchant marine were also established by Colbert.

Incidentally, "Colbert" was the name of the French military ship that brought the President of France, Charles de Gaulle, to Canada in 1967 when he proclaimed to cheering crowds (and many separatists) in Montreal, "Vive le Quebec! Vive le Quebec libre!" This caused a great stir in English Canada because it seemed to encourage separatism. Prime Minister Lester B. Pearson was not amused.