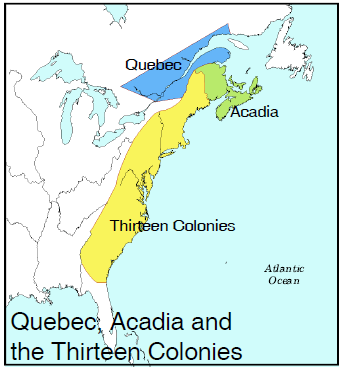 Some say the name came from the Greek "Arcadia" meaning "rural contentment." Others give it Algonquian roots. The heart of early Acadia was Port Royal on the Bay of Fundy. Champlain established a small settlement here in the winter of 1605. They built houses, planted gardens, established a theatre and began the Ordre de Bon Temps. The settlement was abandoned two years later, but attempts were made to resettle it in 1610. The English, in the meantime, had founded Virginia in 1607 and tried to lay claim to the whole eastern seaboard of the new world.

Throughout the 1600s Acadia passed back and forth between England and France several times. During one of its English periods in the 1620s, James I, a Scottish King, granted the land to a poet and fellow Scot, William Alexander, who named it New Scotland or Nova Scotia.

The first serious attempt to colonize Acadia began in 1632 after another treaty restored the area to France. The French wanted to build a buffer against expansion from the New England colonies to the south and Governor Isaac de Razilly, a cousin of Louis XIII's powerful advisor, Cardinal Richelieu, brought about 300 men and some women to begin the settlement.

The French settlers drained the flood lands around the Bay of Fundy using sodsod: a layer of ground containing grass and its roots, usually cut into pieces or strips. dikes at first. These were later replaced with more permanent dikesdike: a bank of earth or a dam built as a defence against flooding by a river or the sea. and sluicessluice: a gate, usually within a dike or a dam, that holds back or controls the flow of water. to drain rain water. By building their houses around the bay rather than clearing forest lands, the settlers didn't disturb the local Indigenous people and were able to enjoy an unusually peaceful co-existence with all the Indigenous nations of the area - mostly Mi'kmaq and Malecite. These reclaimed lands were also extremely fertile for farming and crops like wheat, oats and apples were grown in abundance. 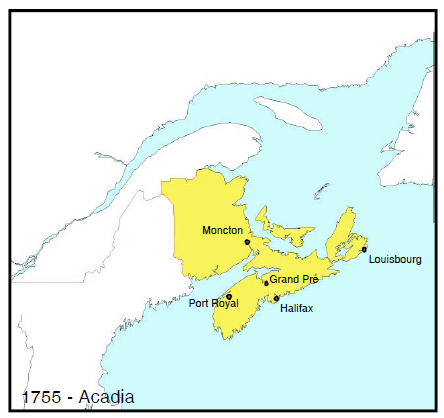 The Acadians also had quite an active trading relationship with the English colonies to the south, selling their surplus grain and buying manufactured products like cloth, dishes and tobacco and West Indian imports like rum and molasses.