Improvements in the piano in the 18th century led to an increase in concert musicians. This is how composer 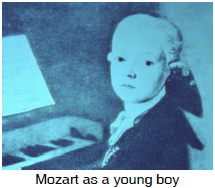 Wolfgang Amadeus Mozart (1756-1791) began his career at the age of seven, just as the Seven Years' War was coming to an end. Other composers of the period include Christoph Willibold Gluck (1714-1787) and Joseph Haydn (1732- 1809). Music was very important in 18th century Austria and Germany and nearly every middle-class family had a harpsichord and gave musical instruction to their children.

In England, Samuel Johnson (1709-1784) spent nine years preparing a dictionary of the English language. He is best known through the writings of his biographer, James Boswell (1740-1795). 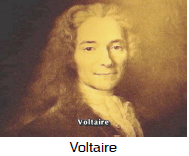 French writing was dominated by philosophers like Voltaire and Rousseau Rousseau, Jean-Jacques: a philosopher who was born in Geneva in 1712 of lower class Protestant origin. He did not become a successful writer until he was 40. His most famous work is the "Social Contract.". German philosophy as written by Emmanuel Kant promoted the new belief in reason. Goethe, more romantic by nature, wrote Faust, his famous version of the German legend about the man who sold his soul to the devil in return for knowledge and power.