Maurice Duplessis was the leader of the Union Nationale, a Quebec political party that was founded during the depression. The UN won the 1936 election in Quebec, lost in 1939 and then regained power in 1944 and held onto it for the next 16 years. 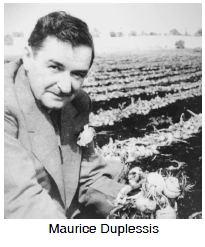 Duplessis was very conservative and favoured business and the Catholic church. The church responded by providing uncritical support of the Duplessis regime. Duplessis' pro-business environment encouraged a lot of growth in the province, particularly from foreign investment. He was also very independent and refused to give up provincial power to Ottawa in return for offers of federal money.

The asbestos strike in Quebec in 1949 showed Duplessis' hard line against unions. The strike lasted five months and involved 5000 workers. Duplessis responded by sending in police squads to break the strike and he decertified: the certification of something (a union) is taken away; it is made illegal or unauthorized.decertified the union. One of the strike supporters was a young intellectual, Pierre Elliott Trudeau. Some have called 1949 the beginning of the Quiet Revolution - the real moment of awakening for Quebec.

Although Duplessis was known to stuff ballot boxes at election time and extort: obtain by threats, force, fraud or illegal use of authority.extort money from businesses to fill his campaign fund, he did keep taxes down and the province reasonably out of debt. By 1960, however, there was enough vocal criticism of the Union Nationale that it couldn't survive the death of its strong leader and lost the election to the Liberals under Jean Lesage.