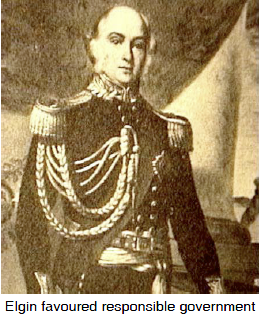 But in 1840 there were no official political parties, and although there was an elected Assembly, the executive branch of government, which advised the
governor: an appointed representative of the Crown sent to govern a colony.Governor, was not drawn from this elected group. It was appointed by the Governor and was responsible to him, not to the voters.

Political parties were swiftly taking shape around this issue. Reformers like Robert Baldwin and Louis LaFontaine were leading the push for responsible government, and some Tories, or Conservatives, were arguing against change. The people advocating responsible government were not necessarily more democracy: a system of government that is run by the people who live under it, either through direct vote or by electing representatives.democratic. They were people with a particular vision of economic development which they felt was being held back by the present structure. If the executive branch of government was drawn from the elected Assembly, they reasoned, it would have that Assembly's support for its policies and things could move ahead. As it was, the Assembly and the executive were always at odds. Plans for things like canals and railways were continually being held up.

With responsible government, the Reformer: a person who supported the movement to bring responsible government to the colonies.Reformers thought, government could be more efficient and power would rest with local people rather than a British governor, especially the key power to issue patronage: in politics, the power to give jobs or favours, especially contracts to friends and supporters.patronage. By uniting together for these common aims, Baldwin and LaFontaine also began the coalition of French and English leaders that would be characteristic of Canadian government for a long time after. 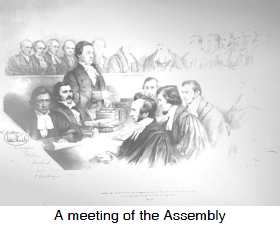 A succession of Governors juggled these conflicting demands until finally Lord Elgin arrived in Canada. He happened to favour responsible government. His position was put to the test with the Rebellion Losses Bill of 1849. Although wildly unpopular in some circles, it had been passed by the Reform ministry of Baldwin and LaFontaine and Lord Elgin was obliged to approve it, even though he was attacked in the streets by mobs and the parliament buildings in Montreal were burned to the ground in protest.

The British government stood behind Elgin indicating an important change in the constitutional relationship between the mother country and Canada. Great Britain would no longer interfere in the internal affairs of the elected government of its colony.