The American colonies looked upon the Quebec Act of 1774 as yet another Intolerable Act Intolerable Acts: A number of Acts passed by Britain in the 1760s and 70s which angered the inhabitants of the Thirteen Colonies eventually leading to the American Revolution. The Quebec Act was one of them. by the British government because it gave the vast Ohio territory to Quebec. 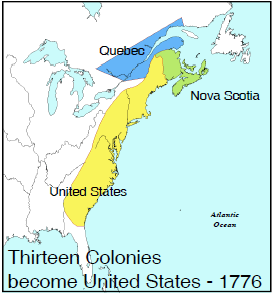 This added to the many perceived injustices which the American colonists finally revolted against. The American Revolution of 1776 severed the Thirteen Colonies from Britain and established them as an independent country called the United States of America.