The Act of Union gave the old colony of Quebec its fourth constitutionconstitution: A constitution is the system of fundamental principles according to which a nation, state or group is governed. since the Conquest (preceding were military government, followed by the Quebec Act of 1774, and the Canada Act of 1791). 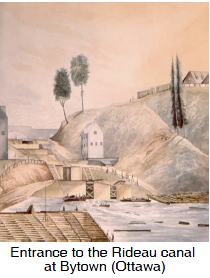 It joined Upper and Lower Canada under a single legislatureLegislature: the branch of government responsible for making laws. and renamed the two provinces Canada West and Canada East (pottery from that time can still be found with a CW or CE stamped on it).

The Legislature consisted of two houses. The Upper House, or Legislative Council, was appointed for life. The members of the Lower House, or House of Assembly, were elected. Candidates had to be British subjects and own 500 pounds worth of property (about $2000).

Both Upper and Lower Canada had equal representation in the Assembly, regardless of population, even though at the time the largely French-speaking Canada East had 670 000 people and English-speaking Canada West had only 480 000.