When the habitants of New France were carving a life for themselves out of the pristine forests of the New World, a new mood was taking hold among the educated minds of Europe. There was a change from supernatural and religious thinking to a more scientific and secular way of looking at the world. All over Europe, from England to France to Italy and Holland, people like Newton, Pascal, Descartes and Huygens were examining the physical world and finding natural laws that seemed to explain how the universe operated. Everywhere, people were experimenting, measuring, calculating, observing and recording statistics. All areas of science - mathematics, physics, astronomy, geology, chemistry, biology and so on - were adding knowledge by leaps and bounds. 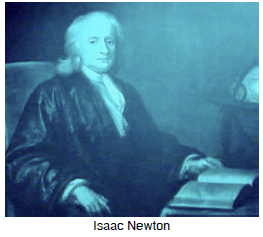 Sir Isaac Newton is the best known scientist of the age. He contributed new ideas in many different areas from pure mathematics to the practical improvement of the telescope. He is perhaps best known for his observation of falling apples that led him to formulate laws of gravitygravity: the natural force that makes objects move, or tend to move, toward each other or toward the centre of the earth. that he applied not only here on earth, but to the motions of the planets.

A scientist named Fahrenheit improved the thermometer in 1714, by using mercury instead of alcohol to measure temperature. The invention of the safety valve to prevent explosion when water was boiled in a closed vessel opened the way for development of the steam engine that would soon transform life during the Industrial Revolution.

The new inventions and scientific discoveries of this period from the mid-1600s to the early 1700s are too numerous to list, but this new appreciation of practical knowledge, order and precision and belief in the existence of a natural order of things was to have a big impact on other areas of life - music, literature and especially religion.

King James I proclaimed the flag of the Royal Union or the Union Jack as the official flag of Great Britain. This was made of two superimposed crosses - the English cross of St. George and the Scottish cross of St. Andrew. Later the Irish cross of St. Patrick was added.

In 1670 the Hudson's Bay Company was established by the English with the help of French fur traders Radisson and Groseilliers who had been turned down by the French when they presented them with their discovery of vast resources in the area around Hudson Bay. King Charles II of England granted a charter to the company giving it sole authority over the lands whose waters drained into Hudson Bay. One of the charter members and the King's cousin was Prince Rupert and the territory became known as Rupert's Land. The HBC set up trading posts around the bay which required the native fur traders to travel to the post with their pelts. The French coureurs de boiscoureurs de bois: the coureurs de bois were skilled woodsmen, trappers & canoeists, important to the fur trade. had travelled inland to meet the natives in their own territory. In reaction against the formation of the HBC, the fur traders of Montreal funded La Vérendrye and his sons in their explorations into the west early in the 18th century.