When the British inventor, Richard Trevithick, applied the newly improved steam engine of Scotsman James Watt, to a coal mine tramway in 1804 he laid the foundation for the first railway. He used high pressure steam and his method of exhausting it out the smokestack of the firebox created a forced draft that kept the fire hot. These two developments were used in all later steam locomotives. 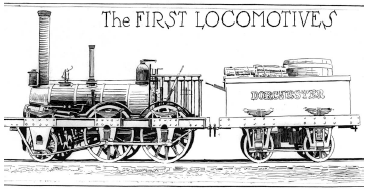 Another English inventor, George Stephenson, is usually credited as the creator of the modern locomotive. An early engine, the Locomotion, made its first trip on September 25, 1825 carrying both freight and passengers. In 1829, his most famous engine, the Rocket, made its debut, winning a performance contest sponsored by the Liverpool and Manchester Railway. This engine had all the essential elements of a practical modern locomotive engine and it marked the beginning of the railway age.

Throughout the rest of the 19th century, railway building spread through England, France, Germany, the United States, Canada, other European countries, and Japan where, in every case, it was a central feature of industrialization.

<< Prev: Terms of the Act of Union
Further Reference