James Douglas was born in British Guiana in the West Indies. He was of mixed race, like the Métis of Canada. His mother was a "free coloured woman" and his father was a Scottish merchant. He was sent to school in Scotland at the age of 12 and left at 16 to apprentice with the North West Company. 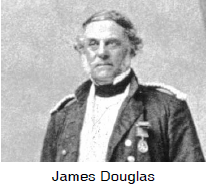 When that company merged with the Hudson's Bay Company in 1821, Douglas travelled to the northern Oregon Territory for the HBC. He worked for chief factor William Connolly. In 1828 he married Connolly's daughter, Amelia, whose mother was Cree.

Douglas' mixed blood and that of his wife gave him a more sympathetic view of Indigenous issues than many others in positions of leadership. His years as chief factor and later governor of what would become British Columbia were marked by mutual trust between himself and most Indigenous nations. Not that he didn't punish individual Indigenous people for attacks on Europeans, but his discipline was selective. He didn't attack whole groups or nations for the actions of a few individuals.

From 1842 to 1844 Douglas supervised the building of Fort Victoria. He had chosen the site for the new HBC headquarters because of its protected harbour and fertile surrounding plains which would be good for growing food. After the resignation of Richard Blanshard as Vancouver Island's first governor, Douglas left his position as chief factor for the Hudson's Bay Company and was appointed governor of the new colony.

In the 1850s, anxious to avoid Indian wars between the Indigenous peoples and white settlers, Douglas signed fourteen treaties on Vancouver Island. The amount of reserve land allocated to each Indigenous person was not terribly large - four hectares - but the fact that he made these treaties and paid the Indigenous peoples for their land shows that he acknowledged them as the original occupants. 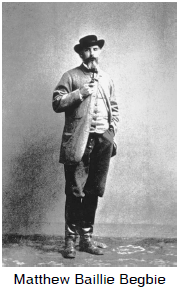 During the gold rushes of 1858-1860 which proceeded up the Fraser River and into Cariboo country, Douglas worried about the impact of so many American miners coming into British territory. He appointed Matthew Begbie as chief justice and paid for a circuit court system. Begbie travelled around to various mining communities and administered a swift form of British justice which helped to strengthen the British way of doing things north of the 49th parallel.

Douglas also encouraged new industries in the colony of Vancouver Island, namely coal mining, lumbering, fishing and farming. His construction of the Cariboo Road greatly improved communications on the mainland.

Although by the 1860s Douglas' autocratic approach to governing was being criticized by a growing group of reformers in the Assembly, he had done much to develop the colonies of Vancouver Island and British Columbia when he retired in 1864. Douglas died a Canadian in Victoria in 1877.