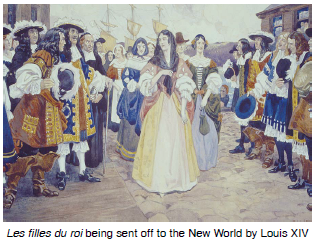 Although some women did pay their own way to New France, both before and after the period of les filles, it was the young women sent at the expense of the king between 1663 and 1673 who are generally referred to as Les Filles du roi, or King's Daughters. Strong country girls around sixteen years of age were the ones usually chosen, though poor girls and orphans from Paris were also sent. Once in the new world they were looked after by nuns until they had found husbands. They often had their choice of mates, since there were few women compared to the number of men. Life was still hard for them, though, and the winters were more severe than anything they had known in France.

Louis even supplied dowriesdowry: the money, property, etc. that brides bring to their husbands at marriage. for his "filles" which usually consisted of clothing or household supplies. This was more than their poor families back home might have been able to provide and although they faced hardship in New France, the life they left behind often had more limited prospects.