After the Red River Rebellion, the Métis moved from Manitoba to the northwest where they could continue their way of life, hunting buffalo and establishing their traditional long narrow farms. These were centred around the Saskatchewan River. For fifteen years the Métis, First Nations people and a few white settlers lived peacefully together in the area. 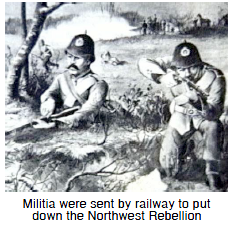 In the 1880s problems began to emerge. The Métis found that their narrow strips of land were being disregarded by government surveyors, mapping out grid patterns in advance of railway expansion and land development. The Indigenous people were suffering from diseases brought by the white settlers, like smallpox, for which they had no immunity: resistance to disease.immunity. And the dwindling buffalo herds were depriving them of their main source of food. The white settlers were also contending with high costs and a weak market for their farm products during a period of world recession. They began to make more demands on the government in Ottawa, both for assistance and for political reforms.

By 1884 Métis frustration caused them to send a delegation, led by Gabriel Dumont of Batoche, to Montana where the exiled Louis Riel was teaching school. In the 1870s Riel's relatives had sent him to a lunatic asylum in Montreal because he had experienced visions and began to see himself as the prophet of the New World. He still had his messianic: of a saviour or Messiah.messianic beliefs when he took up the challenge of the Métis and returned to the northwest to lead them in their struggle against the Canadian government.

He thought he could use much the same strategy as he had in 1870 in the Red River Rebellion. He set up a provisional government: a temporary government usually established to rule until an officially recognized government can be established.provisional government with himself as president and Dumont as second-in-command (a descendant of Dumont became the first Métis lieutenant-governor in 1993, appointed by the government of Manitoba). 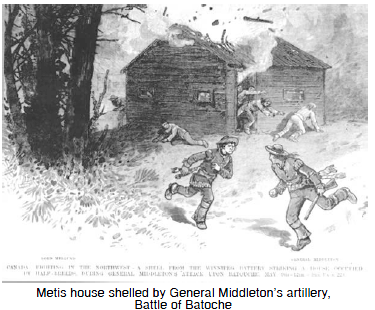 Things had changed, though. There was now a large police force in the area - the North-West Mounted Police (NWMP) - and a railway linking it to central Canada. In fact, when Macdonald sent troop reinforcements by rail (it took only five days from Ottawa) to help quell the rebellion, he was quick to point out how this crisis proved the necessity of having the railway. With these tools, the government did not feel pressed into having to negotiate, as it had 15 years earlier. In March 1885, armed rebellion broke out around Duck Lake. Indian raids at Battleford and Frog Lake were more in pursuit of food than as part of Riel's offensives, but they were considered by the government to be part of the rebellion. The final battle was fought at Métis headquarters in Batoche where the Métis and First Nations forces were decisively defeated. Dumont fled to the United States. Riel surrendered two days later. He was tried and convicted of treason: betraying one's country or ruler.treason, but his execution of Ontario-born Protestant Thomas Scott in 1870 probably had more to do with his conviction. This was revenge for the Anglo-Protestants. Riel's execution left its own bitter legacy. Joseph Israel Tarte, editor of "Le Canadien," said:

"At the moment when the corpse of Riel falls through the trap and twists in convulsions of agony, at that moment an abyss will be dug that will separate Quebec from English-speaking Canada, especially Ontario." 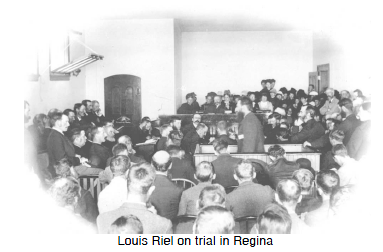