The Proclamation of 1763 was the official royal decree that established Quebec as a British colony. By the Treaty of Paris which had just ended the Seven Years' War, the French lost all their lands in the western hemisphere, except St. Pierre, Miquelon, Guyana, Martinique, St. Lucia and Guadeloupe. 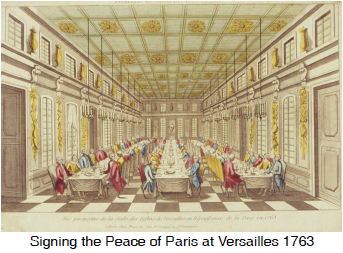 The territory of the newly British colony included the Gaspé peninsula and the St. Lawrence drainage basin from the Ottawa River to Anticosti Island. The lands south of the Great Lakes and west of the Thirteen Colonies were recognized as "Indian Territory," although this didn't last long. The Proclamation included statements which excluded Roman Catholics from holding public office. It declared the intent to have an elected Assembly for the new colony and establish British law, but this was to be delayed until more British settlers had arrived.

<< Prev: James Wolfe
Next: The Age of Enlightenment>>
Further Reference