Railways were all the rage in the 1850s. They were seen as the great indispensible key to economic prosperity. 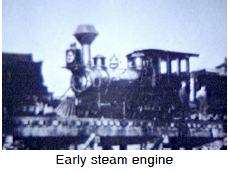 Unlike canals, which had previously been the main transportation routes in the Canadas, railways could go anywhere and they could go year-round. They weren't dependent on nearby waterways and they didn't freeze up for four months of the year. A trip from Toronto to Montreal that had taken the early pioneers weeks to travel, could now be done in less than a day. People in rural communities could read newspapers that had been published just the day before in the city. And the telegraph lines that ran alongside the railways, speeded up communications, too. 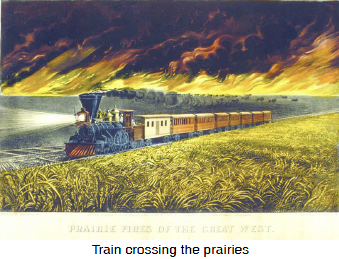 During the 1850s almost 3000 kilometres of railway track were built in the Canadas. These were very expensive projects and usually required investment from outside the country. Even this was not enough, though. The government soon became involved in backing or guaranteeing loans for railway construction. Because of these guarantees (which often left the government holding the bag on loans that were never repaid), many railway building projects expanded too much and went over their heads in debt. Although there was tremendous excitement and emotion attached to railway building, the railways, themselves, were never very profitable.

When the Grand Trunk Railway was finished in 1859 it was the longest railway in the world. It linked the interior of British North America to an ice-free Atlantic port in Portland, Maine and included the Victoria Bridge, a major feat of engineering which crossed the St. Lawrence to the island of Montreal. By the time it was built, the Grand Trunk was $60 million in debt. That was a lot of money in those days, when a penny could by you a bag of candy. The government agreed to help out, a decision which probably had something to do with the fact that six of the railway company's twelve directors were also executive members of the government.