Members of the first elected Assemblies were simply individuals who represented the people in the constituency: a district or riding represented by an elected member of a legislative body.constituency that had elected them. Through the 1840s, however, when the issue of responsible government: a system of government in which the executive (law makers) must have the confidence (support) of a majority in the elected legislative assembly.responsible government was being argued, Assembly members began to take sides and form parties that stood for or against it. 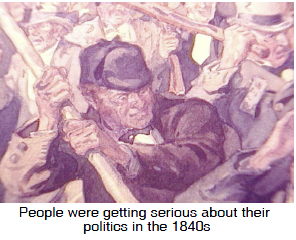 Those supporting reform came to be called Liberals and those against it were called Tories or Conservatives.

Since responsible government relied on the executive branch (those who formed policies) having the "confidence" or support of the majority of the Assembly, it required that the Assembly divide itself into voting blocs which would support or oppose this executive. The group with the majority bloc stayed in power.

<< Prev: Co-operation of French & English in the 1840s
Next: Governors' Attitudes to Responsible Government >>
Further Reference