Canada had been making independent decisions about its domestic matters for sometime, but it was during the twenties that it started to have an independent role in its relations with foreign countries, too. 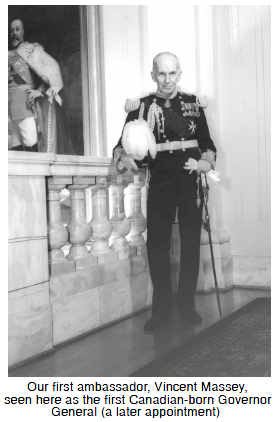 The Department of External Affairs had been nothing more than a letter-writing facility for correspondence between Canada and England until Prime Minister Mackenzie King appointed Dean Oscar Douglas Skelton to direct it. Skelton turned it into a strong and efficient policymaking office.

In 1927 our first foreign embassy was set up in Washington. At that time, these were called legations and our first legate was Vincent Massey, heir to the Massey-Harris farm implement manufacturer. Legations were also established in Paris, Tokyo and London.

<< Prev: Imperial Conferences during the 1920s
Next: The Chanak Incident 1922 >>
Further Reference