1789: The most famous event in Europe to occur around the time of the Canada Act was the French Revolution of 1789. The monarchy, under Louis XVI, was thrown out because people were tired of the unfair system where the aristocracy aristocracy: people of noble title, rank or birth; a ruling group of nobles who had wealth and power. looked after themselves and the common people starved. Also a rising middle class was acquiring wealth, but was kept from power by the entrenched class system. 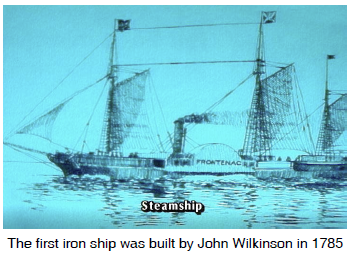 The revolutionaries intended to set up a democratic republican republic: a democratic system of government in which the head of government is a president rather than a monarch. government, but as sometimes happens, the revolutionary leaders got carried away with their new sense of power and many acts of terror resulted. Eventually the people of France looked to a strong new leader to restore order and the era of Napoleon began in 1799.

1783: The Treaty of Paris established peace between Great Britain and the United States, ending the Revolutionary War in North America and recognizing the existence of an independent United States of America. This treaty established the border between the U.S. and the British North American colonies and gave lands west of the Mississippi River to the Americans.

1765: The first steam engine was built by James Watt.