In July 1755 Governor Charles Lawrence and his Halifax Council summoned Acadian representatives to come before them. 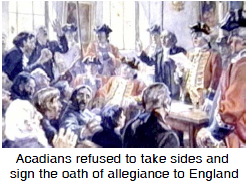 The Acadians were asked again to sign an oath of allegiance that included taking up arms against enemies of the British. When the Acadians refused, the Council ordered that all French-speaking residents of the British colony be expelled. Acadian neutrality had been accepted in the past, but this time, for a variety of reasons, the British carried out their threats.

For one thing, the new war between France and Great Britain wasn't going that well for the British and they had just been stung by a bad defeat in the Ohio Valley. Also, Lawrence and his Council were mostly military men, so in their eyes, people could be either allies or enemies, but not neutral neutral: belonging to no side in a conflict; not taking the part of either side in a conflict or war.. Another sore point was the good relationship the Acadians enjoyed with the Mi'kmaq who were hostile to the English. And the British also looked enviously at the fertile farmland occupied by the Acadians and wanted it for themselves. 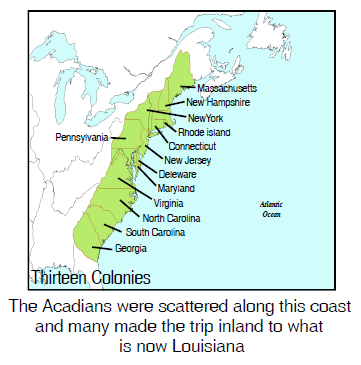 At least 10,000 Acadians were rounded up and crowded into British ships to be scattered among the Thirteen Colonies to the south. (The British didn't want them escaping to Canada or Louisbourg to swell the ranks of the enemy.) Many died at sea. The rest were dropped off, with nothing to sustain them, at arbitrary points along the coast. Families were divided. Some were absorbed into the future American melting pot. Others made it to the Catholic, Spanish colony of Louisiana where they created the Cajun culture. Those who escaped to Cape Breton and Prince Edward Island suffered a second expulsion in 1758 when the British captured those French holdings. 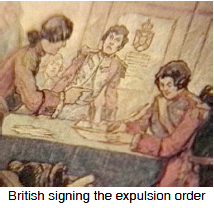 Over the years many Acadians made their way back, searching to reunite their families. One group spent seven years in internment internment: being forced to stay in a certain place. camps in England, were then shipped to France where they couldn't adjust to the rigid European system and finally, after 20 years in exile, returned to their homeland. By then their good farms in the Annapolis Valley had been taken over by New Englanders so they re-established themselves in New Brunswick where over half a million live today.