Louis XIV was only four years old when he became King of France in 1643. Because he was so young, the country was run by the chief minister, Jules Cardinal Mazarin, until 1661 when Mazarin died and Louis assumed control at the age of 22. 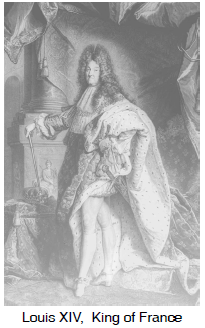 Louis XIV was known as the Sun King. He built a huge, lavish palace outside Paris at Versailles and required that his nobles live there in order to receive pensions and gifts from the King.

He surrounded himself with able ministers, particularly Jean-Baptiste Colbert, but through wars and personal excesses he managed to squander the ample treasury that Colbert had built up. He was also responsible for ending a period of religious tolerance in France by revoking the Edict of NantesEdict of Nantes: a proclamation granting a great deal of religious freedom to Protestants in France, a predominantly Catholic country; issued by Henry IV in 1598 and withdrawn by Louis XIV in 1685. in 1685 and causing the expulsionexpulsion: forcing out (as the British did to the Acadians in 1755). of the Huguenots (French Protestants) from France. Louis XIV died in 1715.