William Lyon Mackenzie emigrated to Canada from Scotland in 1820 and four years later established a newspaper, The Colonial Advocate, which he used to attack the establishment families of Upper Canada. 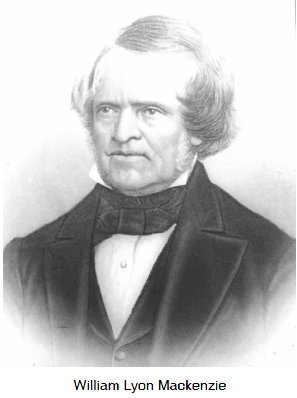 Sons of the Family CompactFamily Compact: name given to the oligarchy that controlled the government of Upper Canada. retaliated by breaking into his office and destroying his typesetting equipment. Mackenzie was not deterred, however. In fact his reform politics became more and more radical with visits to President Andrew Jackson in the United States and British reformers such as Jeremy Bentham in England. Mackenzie was taken by their more radical ideas and wanted an American form of government based on Jacksonian democracyJacksonian democracy: the belief of U.S. president Andrew Jackson that government should be for the good of all the people, not just the privileged few..

Most Reformers, however, supported the more moderate ideas of Robert Baldwin who advocated responsible governmentresponsible government: a system of government in which the executive (law makers) must have the confidence (support) of a majority in the elected legislative assembly., but still on the British model. Mackenzie was elected several times to the Assembly, but was thrown out quite often, too, because of his attacks on the political elite. In 1834 Mackenzie was chosen as the first mayor of Toronto and in 1835 led a committee that tabled the Seventh Report on Grievances. This document attacked the current political system and advocated an elected Legislative Council, an Executive Council responsible to the Assembly, and restrictions on the lieutenant-governor's control over patronage.

In 1837 Mackenzie led an uprising in Upper Canada. On December 5 the rebels, loosely organized and ill-armed, marched down Yonge Street in Toronto. They were soon defeated, but the disturbance they created, following on the heels of a similar rebellion in Lower Canada in November, prompted the British to send Lord Durham over to the colony to find the source of the trouble.

Mackenzie went into exile in the United States. His daughter returned to Canada to marry and start a family, though, and her eldest son, William Lyon Mackenzie King, became one of our most famous Prime Ministers.