Women did not have the right to vote in provincial elections in Quebec until April 1940. (They could vote in federal elections, a right won nationally in 1919.) 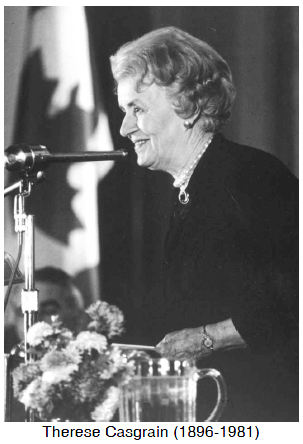 Women
suffragist: a person who favours giving suffrage (the right to vote) to more people, especially women.suffragists like Nellie McClung had campaigned successfully in the rest of the country during the First World War for the right to vote, but Quebec still held to the old ways. Reformer Thérèse Casgrain was one of the leaders of women's
suffrage: a vote; the right to vote.suffrage in Quebec, beginning to campaign for the vote in 1921. After finally achieving that goal in 1940, she continued to be an active reformer, joining the Co-operative Commonwealth Federation in 1946. She became provincial leader of the CCF in the 1950s and was appointed to the Senate in 1970.

<< Prev: D-Day Landings in Normandy
Next: Women in the War >>
Further Reference