George-Étienne Cartier was born in Lower Canada and fought with the rebels in the Papineau uprising of 1837. 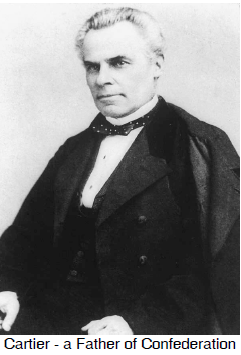 He was Attorney General of Canada East from 1856-1862 and again in 1864 and he was also a member of the Assembly serving under LaFontaine. As leader of the Bleu party of Canada East, Cartier was part of the coalition of 1864 and joined John A. Macdonald in presenting the benefits of Confederation to the Charlottetown Conference later that year. Cartier was also the lawyer for the Grand Trunk Railway and helped set up its charter while he was in the government. He accepted large contributions to his campaign fund from railway promoter Hugh Allan and when this broke out as the Pacific Scandal in 1873, it led to the temporary downfall of the government and the end of Cartier's career. He died the same year of illness.