After much controversy and much cost in money, sweat and lives, the Canadian Pacific Railway was completed on November 7, 1885 when the rail line from Vancouver met up with the westward bound route in the Selkirk Mountains of B.C. 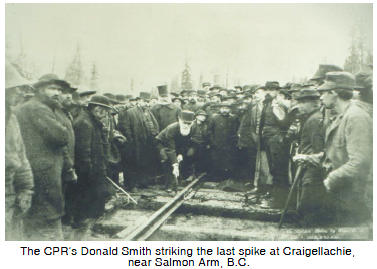 An enormous feat of engineering, this transcontinental railway has become one of the unifying myths of Canadian history. It cemented east-west links of transportation and communication that helped join together what was otherwise quite an illogical geographic premise for a country. 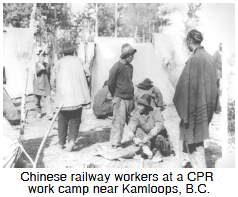 Like the CBC today, it created a connection between distant and remote Canadians that helped defy gravity and prevent a pull south to the United States.

The building of the railway was not a noble process, however. Many opposed the idea of putting so much public money into a rail line across vast uninhabited stretches of the country ahead of any demand for its services. Although Macdonald's rhetoric played on national sentiment, the real immediate benefactors of railway construction were the businessmen who wanted a transportation route that would give them a larger domestic market for their goods, land speculators who profited from the increase in land values, and, to some extent, the workers who got employment from the project although that work was difficult and dangerous and cost many their lives. 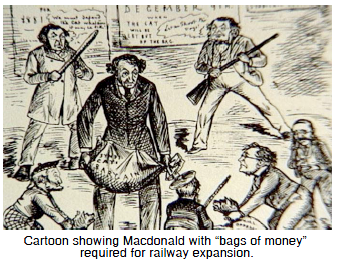 Supposedly a work of private enterprise, the railway was actually built with tremendous government handouts. The men of the syndicate returned time and again for more money and received in the end $63.5 million in public funds and $35 million in government loans. They also received 10.4 million hectares of prime farm land on the prairies, 1200 kilometres of track already completed and paid for by the government, tax exemptions for CPR property and a guaranteed monopoly: the exclusive control of something, with no competition.monopoly until 1900.

Still, whether you think the railway's builders were visionaries or opportunists, (perhaps they were a little of both), the end result was important in consolidating this country from sea to sea and providing the means to build an industrial economy: involving business and manufacturing, where goods are produced with labour and machinery, usually on a large scale, like in a factory.industrial economy here.

Next: John A. Macdonald on the Railway >>
Further Reference