In the early years of New France only a handful of people lived in the colony. There was little economic incentive to come here. 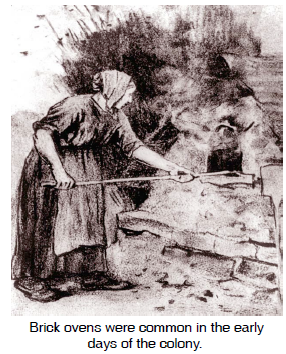 The warmer French colonies in the Caribbean were more appealing for people heading out for a new life and it was much easier there to grow food. In New France there were harsh winters to contend with and often many died of scurvyscurvy: a disease caused by a lack of Vitamin C (fresh fruits and vegetables) in the diet. Symptoms include swollen, bleeding gums and bluish spots on the skin. and exposure to five months of cold weather.

When settlers did come, they faced many hardships. It took a year to clear one hectare of land and there was always the danger of attack from the Haudenosaunee in the area. The French had a good alliance with the Huron-Wendat and Anishinaabe which their fur trade depended on, but the Haudenosaunee continued to raid.

Among the first to settle in New France were missionaries, like the Ursuline sisters and the Jesuits, who tried, mostly in vain, to educate and "civilize" the Indigenous people and convert them to Christianity. As the French-Canadian population increased, the Church provided social services and education to the community. By 1700, the colony's population had grown considerably and most had been born in the new world. They considered themselves "canadiens" and had developed a standard language that included new Indigenous words like "canoe" and "toboggan."

Most people were farmers growing wheat, peas, oats, rye, barley and maize on long, narrow farms huddled along the St. Lawrence River. Although poor by our standards, these people often lived better than some rural people back in France. Some paid less tax to their seigneurseigneur: a landowner in New France whose estates were originally granted by the King of France. He also administered justice within his seigneury. and had more freedom. When children were old enough to help run the farm, the fathers often went off into the bush as coureurs de boiscoureurs de bois: the coureurs de bois were skilled woodsmen, trappers & canoeists, important to the fur trade. to add to their income by doing a little fur trading on the side. About one quarter of the population of New France lived in towns where they were either royal officials, military officers, merchants or artisans. When the men died, the widows sometimes took over their businesses and managed them so well that at one time, in the mid-eighteenth century, some of the biggest entrepreneurs in Quebec City and Montreal were women. Marie-Anne Barbel, for instance, presided over a fur trading business, a pottery works and large real estate holdings.

Life in New France, as in France itself, was based on a hierarchyhierarchy: a system that divides people into higher and lower ranks. that was quite paternalisticpaternalistic: having to do with paternalism - the practice of managing the affairs of a country or group of people as a father manages the affairs of his children.. Although there were drawbacks to this, there were advantages too. Most of the time, the head of this hierarchy, the king, felt obliged to be a good king, rather than a tyrant, and provide certain measures of social security and justice for his subjects.