Napoleon Bonaparte (seated) was a powerful general who crowned himself Emperor of France in 1804 and held onto power until 1814. 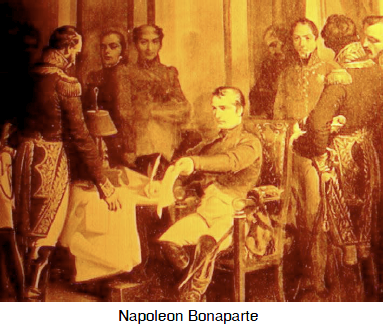 He brought many reforms to France, including a system of laws called the Napoleonic Code, trial by jury, and the abolitionabolition: the act of doing away with or putting an end to something. of feudalismfeudalism: a social, economic and political system whereby vassals (or serfs) owed military and other services to their lords in return for use of his land and protection.. Napoleon also had visions of uniting the whole European continent into one economic unit with himself at the head. His efforts to achieve this resulted in several wars that are known as the Napoleonic Wars.

Napoleon's "Continental System" did not include Great Britain and he tried to break the British Isles by declaring a blockadeblockade: shutting off an area by troops or ships to prevent ingoing or outgoing movement or trade.. This was a strategy he couldn't enforce, however, because his navy was inferior to Britain's. Britain responded by using its strong navy to close Napoleon's Europe to neutralneutral: belonging to no side in a conflict; not taking the part of either side in a conflict or war. trade. Since the United States was neutral and wanted to trade with France, this action created conflict between Great Britain and the U.S. and became an important factor leading to the War of 1812.

Napoleon was finally defeated when Russia withdrew from a treaty it had had with Napoleon. He retaliated by attacking Russia. By using a scorched earthscorched earth: during war, the strategy of a retreating army to destroy crops and equipment so that they can't be used by the advancing enemy. policy, the Russians destroyed crops as they retreated to Moscow, drawing the French troops in, but leaving nothing for them to survive on. The Russian winter finally broke the back of Napoleon's army. By this time, all those opposing Napoleon - Austria, Prussia, Great Britain and Russia - had joined forces and he was defeated in 1814. The Bourbon monarchy, which had been ousted during the French Revolution, was restored to France.