Canada in the 1890s was much more urban than it had been just after Confederation. 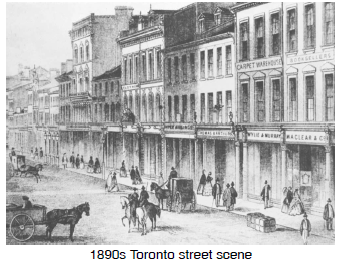 By now one out of three Canadians lived in towns or cities, part of an increasing industrial economy. While Canada had been developing its industries since the 1850s, these industries were becoming less local and more national. Instead of small village businesses like grist mills and blacksmiths which served local markets, there were large national companies like the CPR and Eaton's which employed hundreds of people and operated across the country. 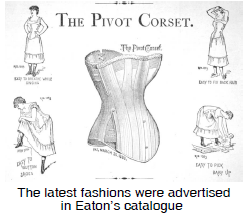 In some ways this was good for the consumer by making things cheaper. But it also created the same miserable working conditions that Dickens: Charles Dickens (1812-1870) was an English novelist. His many books include Oliver Twist and Great Expectations.Dickens described in many of his books which were set among the smokestacks of Britain's industrial revolution. There were long hours, dangerous factories filled with noisy steam-propelled machines and a strict discipline that contrasted sharply to the independence of the village craftsperson or farmer. Women in the cities perhaps had more options than the farm wife, but their position was less secure and work outside the home was poorly paid and had less honour. 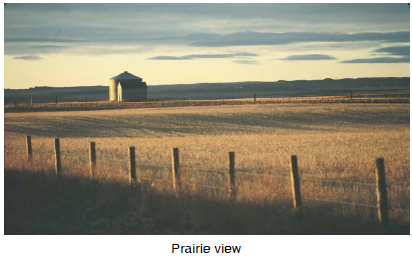 Because there was little public transportation, workers lived in crowded conditions within walking distance of their factories.

While industrialization developed in the east, the west was beginning to cultivate wheat for export on large farms. Still, despite this appearance of modernization in the economy, most Canadian wealth was still coming from the production of staples and raw materials - things like fish, wheat, minerals, lumber and hydro-electricity.